Philadelphia 8042-work on the rear end and roof

Work has been completed framing the rear of 8042.  We are waiting to acquire steel needed for the rear of the car.  Keith has started removing original roof sheeting and applying new sheeting that he milled over the end of the year break. 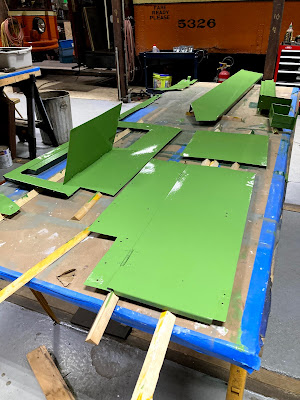 Prior to Keith's return on January 6 metal panels for the upper portion of the front left platform wall were refinished and placed in storage.  Lower panels were painted during the last week of December and the first week of January.
Lower panels were installed January 14.  The cap for the lower cabinet is shown in the photo above. 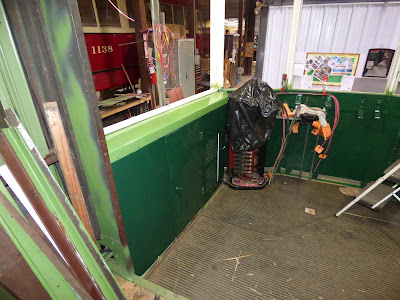 Work to reassemble the rear end of the car started on January 6 with the fitting of the lower crown beam. 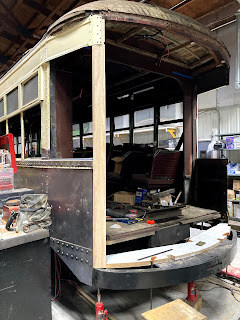 Posts were fitted then removed and the area was painted. 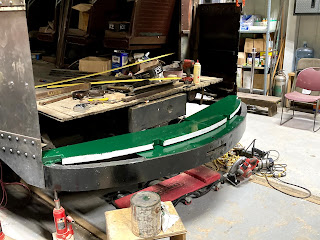 Posts were put back into place after the placement of the floor crown beam.  Window sills were fitted to slots cut into the posts and then shaped to allow for wedges to be placed to hold the sills firmly in place 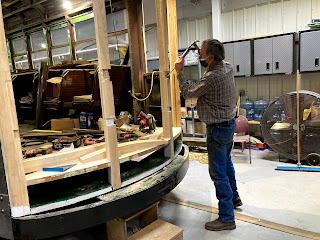 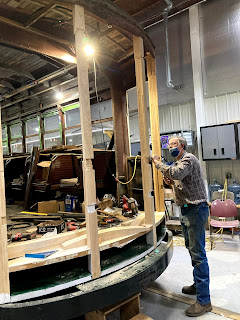 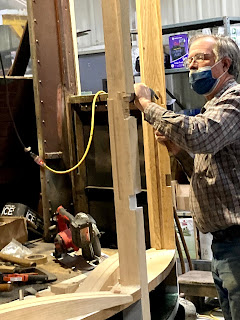 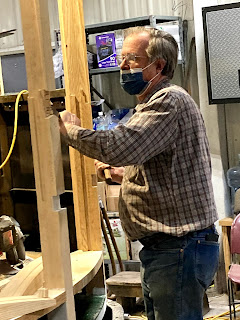 With sills and reinforcement in place the framing was completed 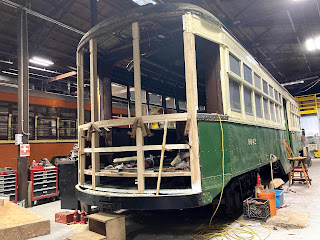 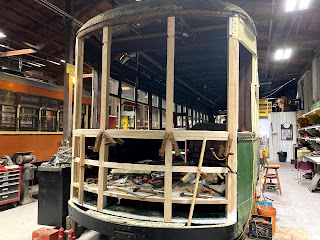 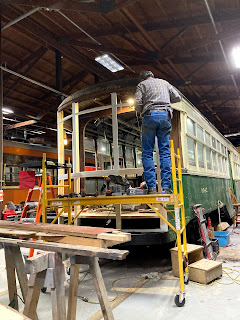 With the framing in place the new steel panel was put in place between the top of the framing and the end of the bonnet roof. 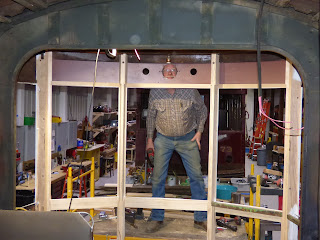 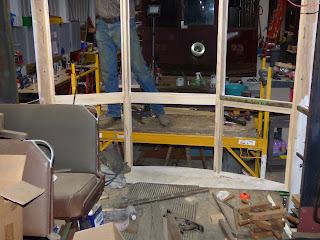 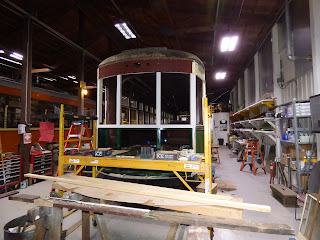 After completing the framing of the rear of the car the work started on the roof with the fabrication of ventilator enclosures for the roof. 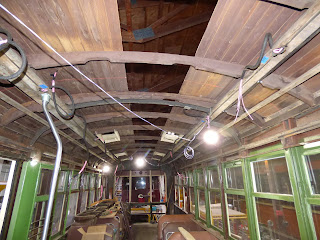 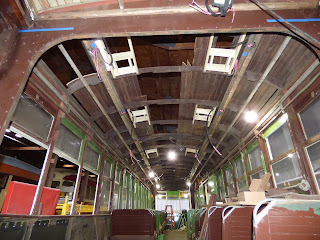 After ventilator enclosures were complete work started to remove the roof sheeting and install the new. 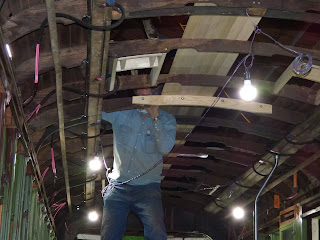 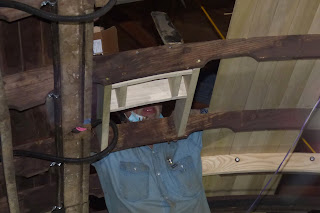 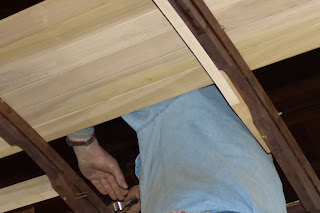 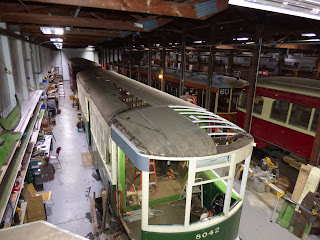 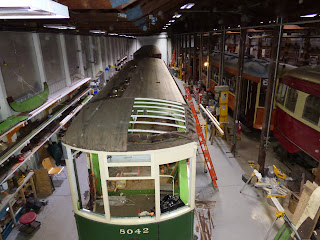 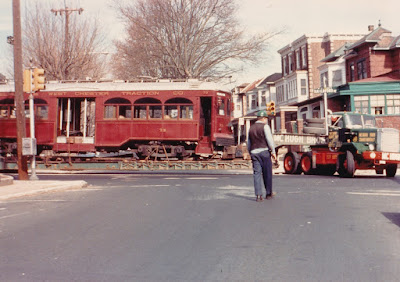 McHugh truck turning from Haverford Avenue to 59th Street near Callowhill Depot
At the top of the page: Red Arrow 73 seen in 1976 being delivered to city division for ill-fated Bicentenial operation at Independence Hall. Work has started to renovate and reactivate this car for wheelchair guests at the Museum.
The work on 73 has been progressing nicely with Michael Buchta spending considerable time removing the sash including the lift and stationary arched sash.  Saturday December 19 Michael was assisted by Operator regular CJ Bick.  Together they made a big effort to scraped paint and remove sash.  They also got out the needle gun and chipped all the paint off of the #2 end anti-climber.
In December Keith Bray inspected the car and removed samples of tack strip and roof sheathing.  He also discussed the fabrication of arched windows that would make their construction more robust.  The center door cars did not survive with these windows intact so, there were no samples of their original construction.  Building a rectangular frame with curved fillers to make the arch is likely the way they were originally constructed. 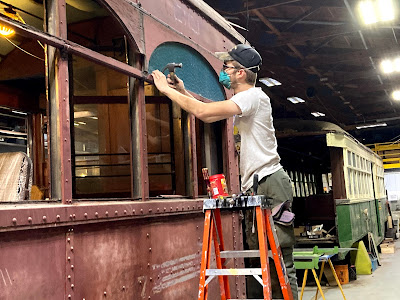 Michael works to remove upper sash from 73 that are badly dry rotted. 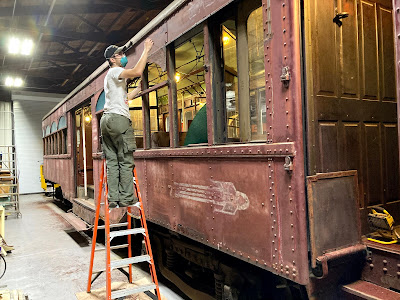 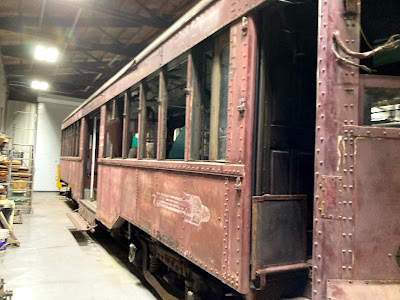 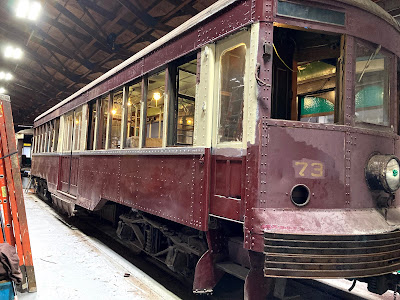 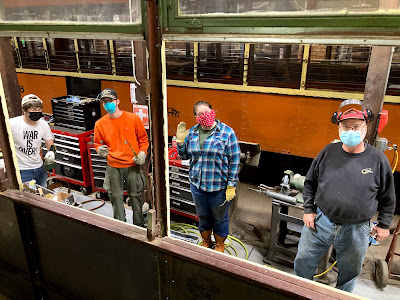 Friday December 18 we assembled a crew that included Ralph, Sarah, Michael and Ayden who worked with Keith Bray to perform riveting of the new steel sheets on the rear of Philadelphia 8042. 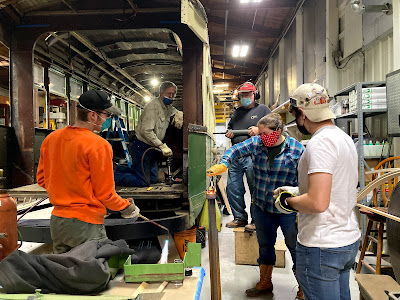 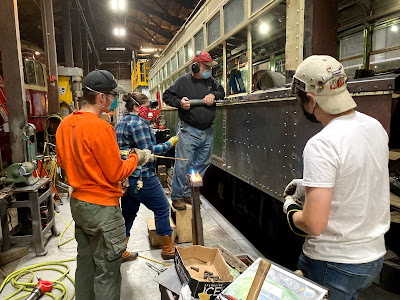