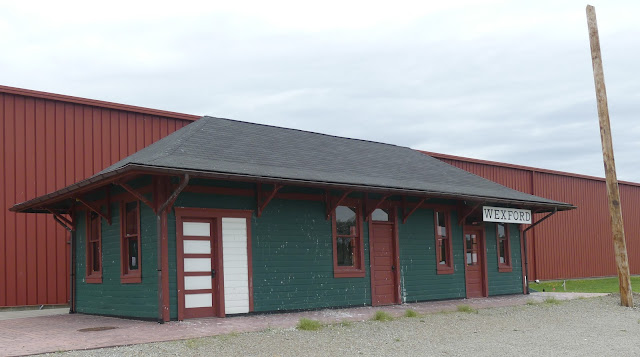 The need for cleaning is much more evident in person. 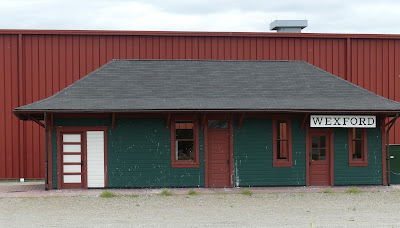 The wild birds (probably Grackles) are coating the Wexford Station with their Poo... The have also done the job on the floor inside track 35 and the outside of the doors.  Rubber flaps have not worked.
Saturday (5-16) Dan Bower, Steve Hudspeth, Katie Imler, Bernie Orient and George Greenbaum got out the  crane car M283 and backed it up the Arden Mines Valley to the loop and removed a tree that fell there at some unspecified time.  Dan drove the Case loader from its APB storage location to our plot near the cut at Yanavich so that the cut logs could be dumped away from the track to rot I presume.  I spoke to Dan at the TDB yesterday when I was working to clear out shop equipment we have used there since shortly after the building opened.  There are no photos to share from yesterday.

The first big job we did at the TDB was in 2005 when we cleaned down Philadelphia 8042 and painted the exterior.  The paint job is the one seen in the above photo.  It is the last scheme applied to the car around 1953 when the window guards were moved to the interior.  While at work I worked to rebuild 24 sash with smashed glass inflicted by vandals in Philadelphia when the  car was stored in storage under Interstate 95.  The car was all shined up and took the forefront in May 2005 when the ribbon was cut on the TDB.
Exterior painting of Pittsburgh Railways 1467 and 739 followed roll out of 8042, with the plan to make them more displayable.  West Penn 739 got the full treatment below the window sills but the letterboard never received the lettering.  Now that I have vinyl cutter and tracings from the lettering formerly on West Penn 832 it'll be possible complete this.
This week we recently received a proposal from Keith Bray to complete work originally laid out in three phases but now reduced to two.  The scope has also been expanded and adjusted to exclude the canvas and pole base support boards.  The interior ceiling will be tackled while adding the rebuilding of the rear platform framework,
This morning I took a spin around property and found there were a couple of cars down by the dumpster at the west campus.  I safely distanced them, rolled down my window and asked if they were there to visit the museum.  They said no they were gathering there for a drive-up surprise graduation party for a young friend being held at the Arden Club.  It was a surprise so they were lining up at PTM.
I stopped to take a couple photos of the motor car 396 which is out and about since its cosmetic overhaul.  Looks Good!  It has been used a couple of times to move the lawn mowing equipment for grooming the loop at Arden Mines. 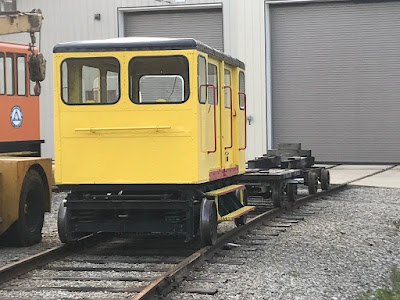 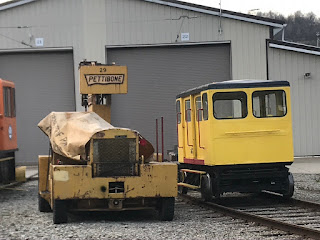 I was walking through the shop and saw this covered with a shop towel so I snapped a photo.  This is a reverser for 3756 or M283 that has been in the rebuilding process for a long time.  Looks like it is ready to go under a car. 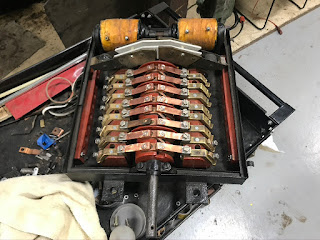 I got an email from Bill Monaghan regarding signs for the trackless trolley at Branford/Shoreline.  They were looking for roll signs. 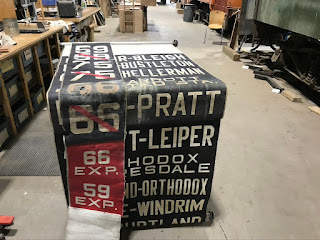 Posted by Trolleyology at 7:49 PM No comments: